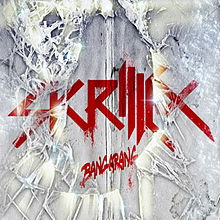 Bangarang is the fifth EP by American electronic music producer Skrillex. It was released on December 23, 2011 exclusively via Beatport while being released on other digital retailers on December 27, 2011. It was released on January 24, 2012 as a physical CD. It was announced via Skrillex’s Twitter page on December 12, 2011 that the EP was completed, while the release date was also announced on December 21. The EP is mostly a collection of songs that have been previously performed during The Mothership Tour (with the exception of “Right on Time”). It features collaborations with The Doors, Sirah, Wolfgang Gartner, 12th Planet, Kill the Noise and Ellie Goulding. Musically, Bangarang has multiple influences of electro house, dubstep and progressive house, while also incorporating elements of trance, drum and bass, rap rock, experimental rock and ska. It features syncopated rhythmic build-ups, technical breakdowns and “chopped-up” vocal hooks, as well as multiple vocal samples. An orchestral song was also featured as a bonus track on the iTunes edition.