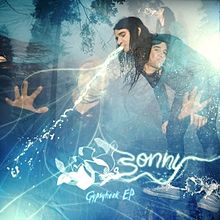 Gypsyhook is the first solo release by Sonny Moore, who would later use the alias Skrillex for future releases. It was recorded summer 2008 and was released on April 7, 2009. On December 12, 2008, Moore posted the track listing on his Myspace. The EP features three songs, two of which he has posted demos for, and four remixes. “??” (Ocean Water) is a Japanese version of “Mora”. “Gypsyhook” contains samples of a previously recorded instrumental track, entitled “Look Over at That”, “Copaface2” contains samples of “Float It”, and “Mora” contains samples of “I Know Who You Are”. The official music video for “Mora” was released on February 3, 2009 and was directed by Shawn Butcher.