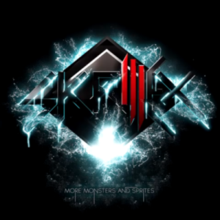 More Monsters and Sprites is the third EP and first remix album by American electronic music producer Skrillex. It was released exclusively on Beatport on June 7, 2011 through Big Beat Records and mau5trap Recordings, while being released on other online retailers on June 21, 2011. It is a follow-up to his previous EP, Scary Monsters and Nice Sprites, containing four additional remixes of the title track done by Dirtyphonics, Phonat, The Juggernauts and Kaskade, as well as three original tracks. The iTunes version also includes a music video of “Rock n’ Roll (Will Take You to the Mountain)”. Musically, More Monsters and Sprites uses prominent elements of dubstep, while also featuring technical breakdowns and influences of reggae within the first track.